For Dying Congregations, A ‘Replant’ Can Offer New Life

From the time he was a teenager, Min Lee wanted to be a missionary.

Lee, who grew up in a Korean American Christian family, said he gave his life to Jesus during a retreat where a missionary from Costa Rica was the guest speaker — which inspired him to think about missionary work as well.

He studied Spanish and ended up spending six months doing missions in Mexico, along with about two years living in a mostly Muslim neighborhood in Toronto. Lee eventually landed in Los Angeles, not far from where he grew up, doing an internship to become a church planter.

Then he ended up at LA City Baptist Church, a small but historic Hispanic congregation floundering after the death of its longtime pastor. Lee started out as a visitor, then was invited first to lead singing, then a Bible study and then eventually became pastor. When he arrived in 2018, the church was down to about a dozen members, most of them elderly. Today the church has closer to 50 people, from a diverse range of backgrounds.

“I thought God was going to call me to be a missionary but instead he sent me to a multiracial church in LA,” Lee said.

LA City Baptist Church is what’s known as a “replant,” an attempt to restore an older, dying congregation to health using some of the lessons gleaned from startup congregations known as church plants. Replanting often involves adding a new pastor who has been trained in how to do outreach, as well as funding and sometimes an influx of volunteers. The idea is to provide resources and new energy to an old congregation, rather than shutting the church down and starting over.

Although not widespread, church replanting is growing in popularity and the approach has been adopted by denominations such as the Southern Baptist Convention, whose North American Mission Board is supporting Lee’s work to replant LA City Baptist. In 2020, NAMB helped fund 50 such replants, according to the latest data available. The agency hopes to work eventually with about 200 replants a year, said Mike Ebert, a spokesman for NAMB.

According to data from the Faith Communities Today 2020 survey, there are lots of churches in the same boat as LA City. The median worship attendance for congregations is 65, down from twice that number in 2000 — leaving many congregations wondering what their future will look like.

For Lee, who is in his mid-30s, the process of replanting has meant a lot of slow but steady work. His biggest task at first was building trust with older congregation members, who came from a different cultural background than he did, and sometimes spoke a different language.

He also had to slowly change the church’s approach to ministry.

“In the beginning, it was really showing that we genuinely care,” he said.

A pastor who replants a congregation needs to be part entrepreneur and part chaplain, said Mark Hallock, pastor of Calvary Church in Englewood, Colorado, and author of “Replant Roadmap,” a guide to the process of rebooting an older church. The pastor needs what he calls “tactical patience” in knowing how to care for people while moving things forward.

Trust and love are the most important factors, he added.

“What we find across the board is that you need a leader who loves people,” Hallock said. “We call it a visionary shepherd, someone who wants to shepherd God’s people and love them well.”

Hallock speaks from experience. When he arrived at Calvary in 2009, the nearly 60-year-old congregation was on its last legs. There were about 30 people in the congregation, and most were worn out, he said. They needed someone who believed in them and someone who could show them a way forward.

With patience, hard work and buy-in from the older members of Calvary, the church turned around and within a few years of Hallock’s arrival, weekend services were drawing about 300 people. The church has gone on to help start 13 new churches and replant 14 older churches.

Among the replants was First Baptist Church of Nampa, Idaho, which was down to 30 people “on a good day” before being replanted, said Butch Schierman, a longtime member. Schierman, an IT professional, had served as interim pastor at First Baptist after the longtime pastor retired.

Things were not going well. “Whatever we were doing was not working,” he said.

Schierman and a handful of other church members approached Calvary about replanting their church. They eventually decided to team up and so far, it’s been a success, he said. The church, now known as Calvary Nampa, remains small, with just over 100 people showing up for services, he said, but the church feels healthy and sustainable.

The process of replanting has its perils. In 2020, a church replant in Minnesota made national headlines after older members felt they were discarded when their church was rebooted. And there are some top-down models of replanting, where a larger church comes in and takes over an older church, rebranding it as a satellite campus.

Hallock prefers an approach that relies on getting buy-in from existing church members.

“This is not a takeover situation,” he said. “This is a situation where we’re coming in and loving those who are there and inviting them to be part of something together that God could do moving forward.”

Americans are giving less of their time and money to religious causes than ever before, a new national Gallup survey shows. By 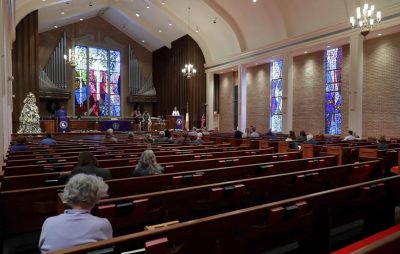 Across US, Houses of Worship Struggle to Rebuild Attendance

When Westminster United Methodist Church in Houston resumed in-person services late last year, after a seven-month halt due to COVID-19, there were 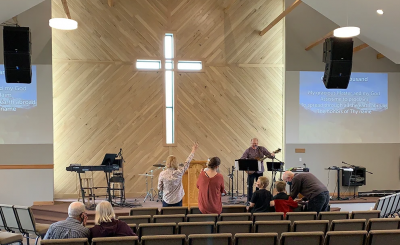 Why the Minichurch is the Latest Trend in American Religion

The Rev. Derek Miller has seen the future of the church in America. And it is small. On a Sunday morning in

2 thoughts on “For Dying Congregations, A ‘Replant’ Can Offer New Life”