Less than a week after resigning as president of Liberty University, Jerry Falwell Jr. was injured in a fall after drinking, according to 911 transcripts and audio obtained by the Huffington Post.

“I’m not going to answer that question,” she reportedly said.

According to the Huffington Post, Jerry Falwell Jr. refused to let his wife take him to the hospital, but a first responder who went to the Falwells’ home found he had cuts on his face and slurred speech. The cuts were reportedly from a trash can that had empty alcohol containers in it.

Faculty and students at Liberty, one of the country’s largest Christian universities, are barred from drinking. Staff are allowed to drink but could be fired if they show up to work under the influence.

“Reporting to work under the influence of any illegal substance or alcohol will be subject to discipline, up to and including termination,” states the school’s employee handbook.

Falwell resigned in August after Reuter’s reported he and his wife had a long-term sexual relationship with a young man whom they also were in business with. Falwell had been placed on leave after posting a photo of himself with his pants unzipped and his arm around a woman who was not his wife. In his hand was a glass with what he claimed was “black water.”

“Since that time, additional matters came to light that made it clear that it would not be in the best interest of the University for him to return from leave and serve as President,” the school said in announcing Falwell’s resignation last month.

The Rev. Jerry Falwell Sr. was well-known as a teetotaler and banned students from drinking when he founded Liberty in the early 1970s. The elder Falwell swore off alcohol after converting to Christianity in his youth.

His father, Carey Falwell, had been a bootlegger whose drinking cut short his life, according to a 1987 Associated Press account of the family’s history, and had shot and killed his own brother during an argument when the brother was drunk.

″It bothered him so much he started drinking and got cirrhosis of the liver,″ Jerry Jr. told the AP. 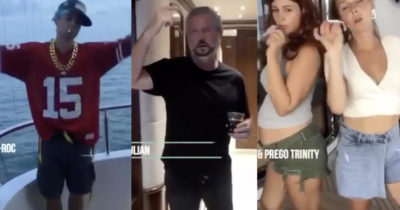 For the past three weeks, the media has largely ignored the video Jerry Falwell Jr. posted from his now infamous “costume party,”