In a leaked audio call obtained by The Daily Mail, the founder and senior pastor of Hillsong Global, Brian Houston, described the events that led up to the firing of the lead pastor of the church’s New York City congregation, Carl Lentz.

“I was already at the point, at the end of the summer, that I felt like Carl and Laura’s time in New York was coming to an end,” Houston said of Lentz and his wife, who also worked for the church.

Brian and Bobbie Houston founded the original Hillsong Church in 1983 in the suburbs of Sydney, Australia. It now has locations in 28 countries and, pre-pandemic, saw an average 150,000 attenders each week, according to its website.

Houston accused Lentz in the Daily Mail recording of “general narcissistic behavior. Manipulating, mistreating people. Breaches of trust. Constantly lying.” Houston went on to describe the global megachurch network as “one house with many rooms,” but he said Lentz always seemed to be doing his own thing with Hillsong East Coast.

“If it was just about a moral failure, perhaps it would have been possible to work with Carl and Laura and work their way through it and have a period of restoration,” Houston said on the call that took place the week before Thanksgiving with global church leadership and top donors.

“But the nature of where my relationship with Carl already was, then add the significant nature and the serious nature of the moral issues, just meant that I believed, and the board believed, the only way to go was to terminate Carl and to start with a fresh start in New York,” Houston said.

The Daily Mail’s report quoted anonymous sources alleging that Lentz had multiple affairs during his tenure at Hillsong, and that Houston implied the same in the recording the newspaper obtained. But while Houston talks about “affairs” in the plural, the recording is not entirely clear.

Houston and Hillsong Global did not immediately respond to requests for comment.

On Nov. 4, Houston emailed staff and members of Hillsong East Coast about Lentz’s termination. The email, obtained by The Roys Report, cited “leadership issues and breaches of trust, plus a recent revelation of moral failures” for Lentz’s firing but did not reveal more details. 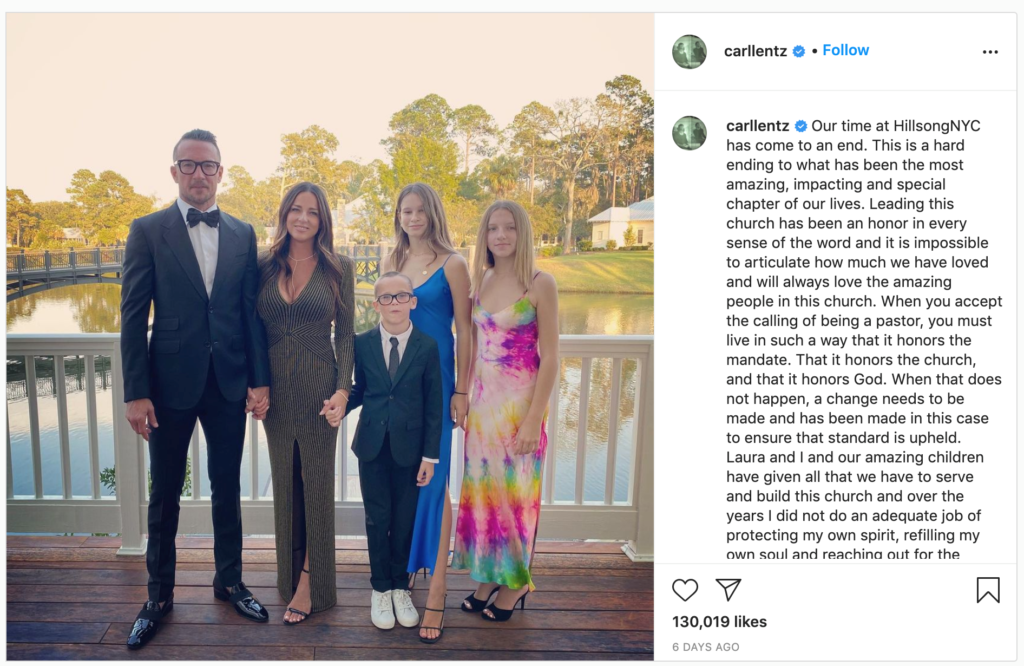 Karim told “Good Morning America” on Nov. 20 that she and Lentz had carried on their affair for five months.

In a reply to Lentz’s Instagram post, Esther Houston, Joel Houston’s wife, implied that, despite his admission, Lentz’s behavior was “ongoing.”

On Nov. 12, Houston announced an independent investigator would review the “inner workings” of Hillsong’s New York City branch. According to a statement by Hillsong on Nov. 13, the church said Houston had “heard from a number of people about their experiences and concerns.”

In the leaked audio call, Houston said a member of the church’s global board listened to staffers’ stories about Hillsong East Coast over two or three days. The sessions raised serious questions about the health of the culture at Hillsong East Coast.

“Carl is an extremely hard man to confront,” Houston said. “It’s not as if people weren’t being heard, but it’s a situation where it’s almost impossible to get an issue raised. And the messenger was usually the one who became the enemy.”

Relatively unknown before taking the helm of Hillsong NYC, Lentz, 37, became a media darling for his hipster clothes, tattooed arms and celebrity congregants, including Justin Bieber and his wife, Hailey Baldwin Bieber, as well as the Jenner sisters. Lentz was one of a number of pastors GQ Magazine described as “hypepriests,” who lead churches frequented by celebrities.

Lentz was raised in Virginia and played basketball at North Carolina State. He moved to Los Angeles to attend King’s College and Seminary. Lentz then headed to Australia to join Hillsong’s training program, Hillsong College, where he met his wife, Laura, who was a family friend of the Houstons.

In the call, Houston disavowed the rumors that Laura had also been fired by Hillsong after Lentz’s termination.

“That’s a media story that isn’t true,” he said. “We didn’t ruthlessly fire someone because of her husband’s sins.”

But, Houston said, Laura was already in the process of resigning. And as the couple has since reportedly moved to Los Angeles, “clearly her role has come to an end anyway,” he said.

On the call, the church leaders described ways they are and plan to continue caring for the Lentz family, “as much as they are letting us care for them.”

The leaders said they are negotiating a severance package the Lentzes have not yet accepted.

“The purpose of that is to help them through this time.”

Houston ended his time on the call by saying he didn’t want to give the impression Lentz was all bad.

“Carl was a passionate character. He was extremely gifted. I think he genuinely, genuinely does care for lost people, hurting people,” Houston said. “I’m certain there are people here at this meeting that it was Carl Lentz that led you to Jesus. So I don’t want anyone to think that we can’t see any good.

“But it was a situation,” Houston added, “that was becoming more and more untenable.”

The results of an investigation by an independent law firm into the culture of Hillsong NYC, the Manhattan site of the global