Loritts Responds to Allegations of Cover-Up: “It wasn’t us trying to hide anything . . . It was following the counsel of lawyers”

Embattled new pastor at The Summit Church, Bryan Loritts, says he wasn’t “trying to hide anything” when he withheld information from his prior congregation about a sexual predator in their midst. Instead, he said, “It was following the counsel of lawyers.”

Loritts’ made the statement in a videotaped interview published yesterday by the Biblical Recorder, a news group owned by the Baptist State Convention of North Carolina of which Summit is a member.

For the past 10 years, Loritts has been dogged by allegations that he covered up the voyeuristic crimes of his brother-in-law, Rick Trotter, while Loritts was lead pastor at Fellowship Memphis and Trotter was the worship pastor.

Though the church discovered Trotter’s phone with secretly recorded videos on it in 2010, police have no record of Trotter’s crimes ever being reported by anyone at Fellowship Memphis. Trotter then went on to lead worship at another church where he repeated his crimes until he was reported to police in 2016.

In the interview, Loritts admitted that he did not inform his congregation about Trotter’s crimes until about six months after the church had discovered them. But Loritts said his secrecy wasn’t motivated by a desire to cover for Trotter, but rather, a desire to minimize liability.

“Legal counsel is clear: You cannot say what this individual did,” Loritts said. But he added, “If I had to do it now, I would have risked being sued by my now ex-brother-in-law if it meant being vocal. I would have thrown caution to the wind.”

“If I had to do it now, I would have risked being sued by my now ex-brother-in-law if it meant being vocal. I would have thrown caution to the wind.”

Loritts also admitted that he failed to call police when a staff member discovered Trotter’s phone in a church bathroom and gave it to Loritts.

“And here’s what I got to own,” Loritts said. “What I should have done immediately was call the cops. I didn’t do that.”

“In some ways . . . I saw myself as a victim,” Loritts said, though he added that his victimization was “not anywhere near the level” of those Trotter secretly recorded.

Loritts also expressed regret that he didn’t do more to prevent another church in Memphis, Downtown Church, from hiring Trotter.

According to a letter Summit Pastor J.D. Greear sent to his congregation in May, Trotter was hired by Downtown Church in Memphis “a few years” after confessing his sins to the Fellowship Memphis congregation. That letter has since been amended. The version of Greear’s letter posted online this week says Downtown Church hired Trotter “a little less than two years” after the public confession.

However, according to Downtown Church’s website, Trotter came on staff as Interim Worship Leader in August 2011—a year after confessing his crime to the congregation at Fellowship Memphis.

Loritts said that at that time, he met with Downtown Church Pastor Richard Rieves and “fully disclosed everything.”

Yet Loritts added. “If I had to do it all over again, I would have put a full court press on, telling him not just, ‘Here’s what (Trotter) did,’ which I told him that. I told him everything. I would have grabbed him by the collars, and I would have said, ‘Do not hire him.’”

“If I had to do it all over again, I would have put a full court press on . . . I would have grabbed him by the collars, and I would have said, ‘Do not hire him.’”

Loritts then choked up and said, “I feel culpable. And what happened with these other people because I didn’t go the extra mile . . . if I had to do it all over again, Seth, I would have went the extra mile. And I gotta own that.”

Yet later in the interview, Loritts admits that in 2015, he hired Trotter himself— to lead worship at a conference for The Kainos Movement.

“That was a horrible, horrible decision that I’ve got to own,” Loritts said.

Loritts ends by asking for forgiveness from the victims, saying “his heart was in the right place” and that the mistakes he’s made “have positioned me well to serve in a place called Summit.”

Greg Selby, a former insider at Fellowship Memphis who accused Loritts of participating in a cover-up with other church leaders, said he’s skeptical of Loritts’ apology.

“These guys are actors on a stage,” Selby said, noting that Loritts has never called him, nor any of the other victims he knows, to apologize.

“Where’s the real apology? Not the one on video, so that everybody will think that I’m a nice person—the apology to the real victims who will call you to the carpet on the truth? You won’t give it because you’re a coward and a fraud.”

Rachel Denhollander, a well-known advocate for abuse survivors, says she has “deep concerns” after watching the video.

Denhollander, who was on a recent conference call between Selby, one of Trotter’s victims, and Summit Church, said “there are serious questions that remain that need to be answered.”

One of the major questions regarding Loritts and the Trotter affair concerns Trotter’s phone, which reportedly vanished in 2010.

“Where’s the real apology? Not the one on video, so that everybody will think that I’m a nice person—the apology to the real victims who will call you to the carpet on the truth?”

In the interview, Loritts said that an intern discovered Trotter’s phone recording her in the bathroom of the church office at about 4:00 on a Thursday afternoon. She then went to Loritts and gave him the phone.

Loritts said he then called Ricky Jenkins into his office to serve as a witness for his meeting with the woman. (Jenkins was a teaching pastor at Fellowship Memphis at the time, but now pastors a church in California.)

I reached out to Jenkins to hear his perspective, but he did not respond.

I also reached out to the intern. She confirmed that she gave Loritts the phone and met with him and Jenkins. She added that the three did not discuss reporting Trotter’s crimes to police and that she left the phone with Loritts.

According to Loritts, he took the phone home overnight. He said the next morning, he gave the phone to Bill Garner, then an executive pastor at Fellowship Memphis, and instructed Garner to call both police and Child Protective Services (CPS).

Loritts said that after giving Garner the phone, he “never saw it again. Still to this day—don’t know what happened.”

Loritts said that after giving Garner the phone, he “never saw it again. Still to this day—don’t know what happened.”

I contacted Loritts about the apparent discrepancy, but he did not respond.

I also called Bill Garner, who’s now a pastor at Harvest Church in Memphis, but he did not return my call.

According to Selby, Loritts said in 2010 that Fellowship’s lawyer had instructed leaders to throw Trotter’s phone in the Mississippi River. Similarly, Jennifer Baker, one of Trotter’s victims, said that Loritts told her in 2010 that Trotter’s phone had been destroyed. She said Loritts wouldn’t say who had destroyed it.

In the interview published yesterday, Brown didn’t ask Loritts about either of these alleged statements.

According to Selby, Loritts said in 2010 that Fellowship’s lawyer had instructed leaders to throw Trotter’s phone in the Mississippi River.

However, Brown did ask Loritts why Loritts had instructed Garner to call CPS and whether Loritts had seen videos of minors on the phone. Brown also noted that a 2016 report in the Commercial Appeal quoted two of Trotter’s victims who claim they were 15- and 16-years-old at the time they were recorded.

Loritts said that he scanned Trotter’s phone when it was in his possession and had seen “block after block” of video thumbnail pictures of videos. But Loritts said he didn’t notice any videos of minors.

Loritts said he instructed Garner to call CPS because he knew minors had been in the church office and may have used the bathroom, and he didn’t want to “leave anything to chance.”

Summit Church said they tried to verify that someone reported Trotter to CPS and to Memphis Police in 2010 but were unable to do so.

Loritts says he regrets that he “didn’t push hard enough for written documentation as it relates to (his staff) contacting the authorities.”

“When I put too much trust in what a person was telling me . . . that’s not enough,” Loritts said. “I should have gone the extra mountain (and said), ‘I actually need to see something physical.’ And I can’t outsource that to anybody else. That’s on me.”

*This information was added after this article was originally published.

Opinion: Bryan Loritts is not ‘Qualified for Ministry’ & Report Doesn’t Clear Him of Wrongdoing 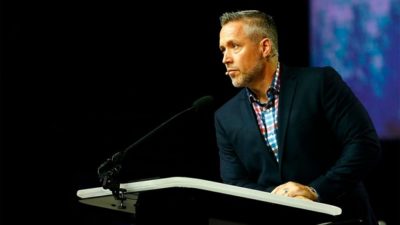 SBC President J.D. Greear: “God did not call Southern Baptists to save America”

Southern Baptist Convention (SBC) President J.D. Greear called out fellow Baptists who he said were sowing dissension and lies in the nation’s

20 thoughts on “Loritts Responds to Allegations of Cover-Up: “It wasn’t us trying to hide anything . . . It was following the counsel of lawyers””